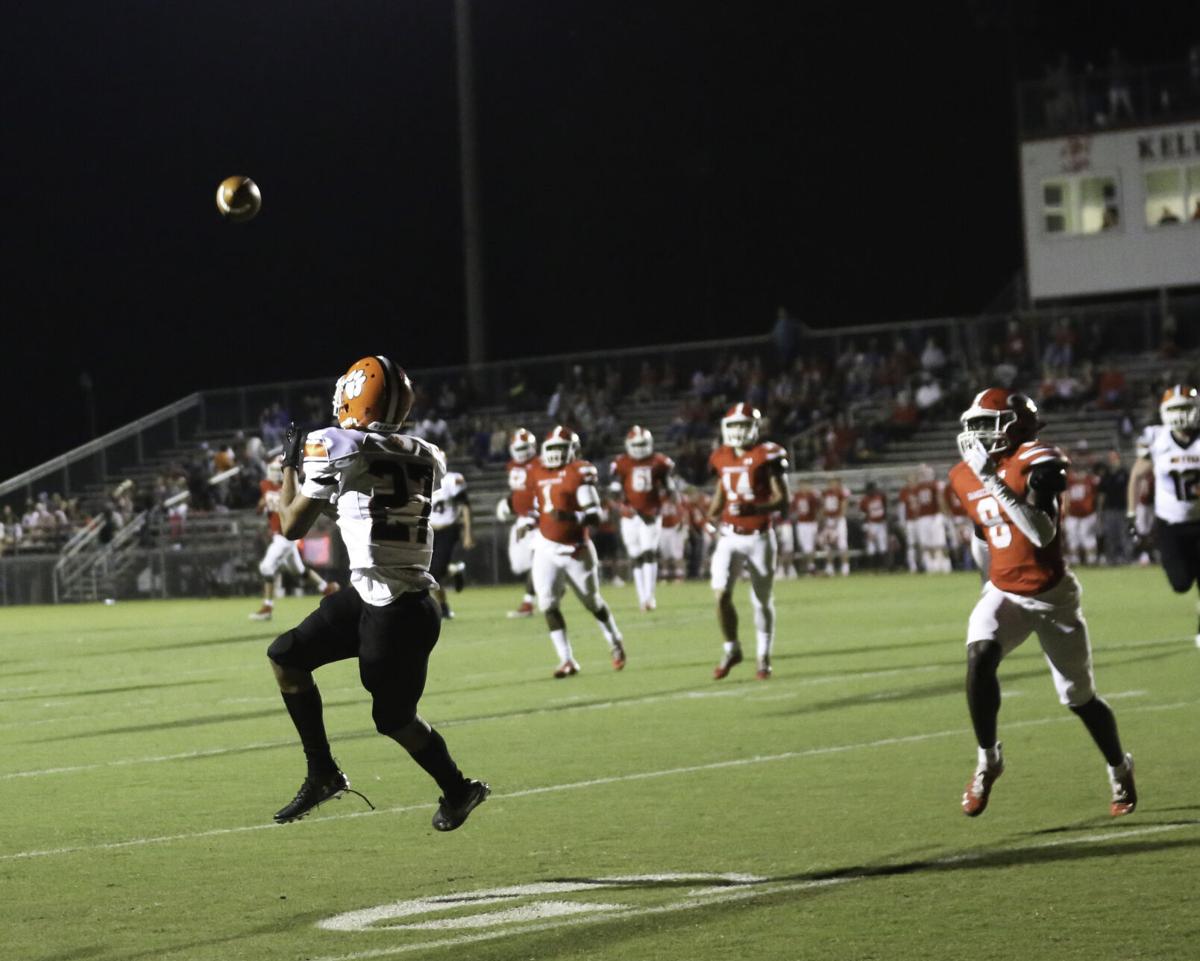 Awesome offense ...Taj Hobbs connects with #27 Cameron Robinson who makes a flying catch and darts into the end zone for a Tiger TD. 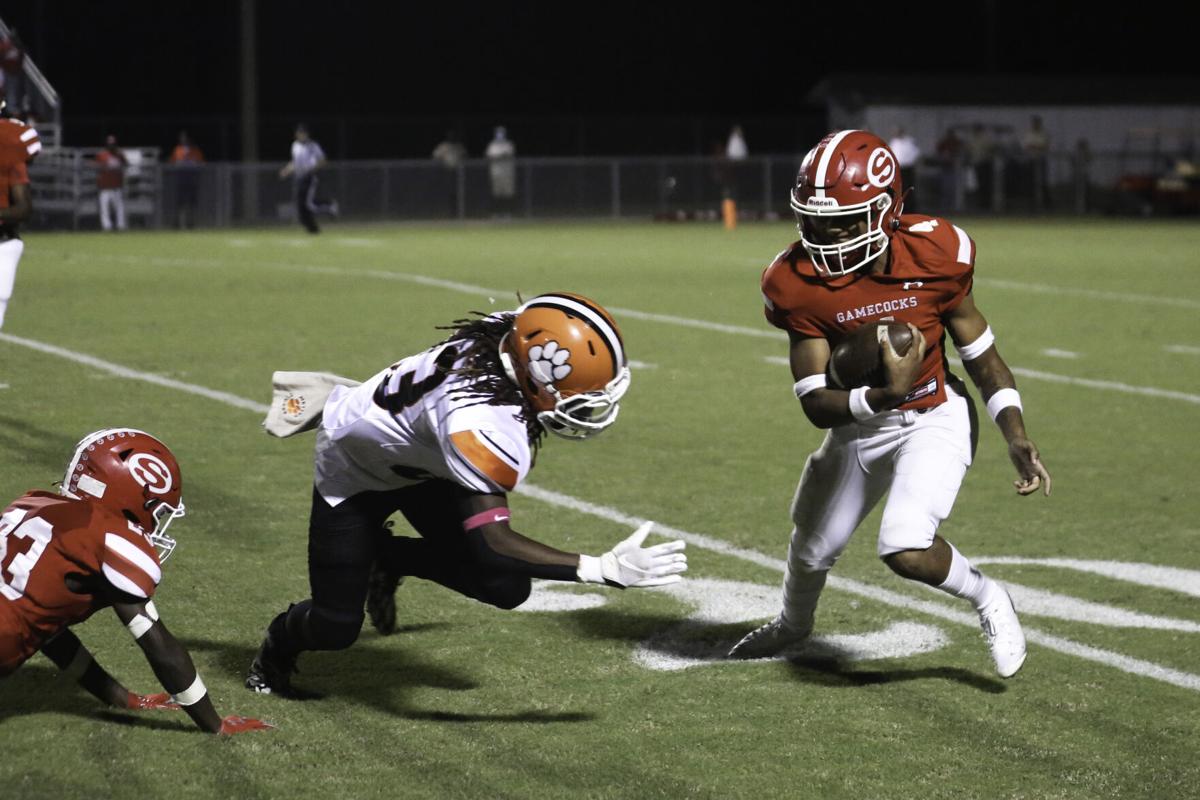 Danny Cheley goes for the tackle to stop a Gamecock advance.

Awesome offense ...Taj Hobbs connects with #27 Cameron Robinson who makes a flying catch and darts into the end zone for a Tiger TD.

Danny Cheley goes for the tackle to stop a Gamecock advance.

The number one ranked Metter Tigers kept their undefeated 2020 season chugging along with a 37-0 win this past Friday night over the Screven County Gamecocks.

The Tigers are now 6-0 on the season, and 3-0 in region play following the road win. Screven County drops to 2-3 overall, but are still in the mix with a region record of 2-1.

If Friday’s game against a tough Screven County squad was Metter’s first real test of the season, they passed it with flying colors. The Tiger offense was rolling, putting up 328 rushing yards.

Quarterback Taj Hobbs tacked on 42 passing yards to bring the total offense to 370 yards. That is a season high for both rushing yards and total offense.

The Tigers had two players rush for over 100 yards Friday night. Aaron Collins led the way with 123 yards on 12 carries and two touchdowns. Reco Coney added 112 yards on 10 carries.

The Metter defense recorded their fourth shutout this season and have still only allowed 10 points through six games.

The defense gave up a season high 127 rushing yards, but they held Screven County to just four passing yards, which is a season low.

The game opened up with both teams going three and out on their first possessions.

Metter started moving the ball in large chunks on this drive. The Tigers picked up three first downs in a row on big run plays en route to the end zone.

Aaron Collins ran for 18 yards to move the ball down to the 27, and Kaliq Jordan followed that up with a 12-yard run to get into the red zone. Aaron Collins capped off the short five-play drive with a 15-yard touchdown run. Taj Hobbs ran in the two point conversion to give Metter an 8-0 lead with 2:16 remaining in the first quarter.

The Tiger defense forced another punt to give the offense the ball back as the game moved into the second quarter. This drive started at the Gamecock 35 following another short punt.

It took the Tigers just five plays to find the end zone on this drive. It was Taj Hobbs connecting with Cameron Robinson on a 21-yard pass that put the points on the board. Hobbs faked the handoff and rolled out to his right.

Robinson ran a great post corner route and was wide open when he caught the ball in the front corner of the end zone. Hobbs threw to Kaliq Jordan to convert the two-point try and the Tiger lead was 16-0 with 9:07 to go in the second quarter.

The Tiger offense would get the ball back following a fourth straight three and out forced by the defense. For the third straight possession, Metter would find pay dirt.

It was another five-play drive highlighted by back-to-back big runs by Aaron Collins and Reco Coney. Collins was first up with a 43-yard scamper over midfield and into Gamecock territory.

Coney followed that up with a 24-yard run to set the Tigers up at the 12-yard line. Two plays later, Josh Kelly punched it in from three yards out. Reco Coney ran in the two-point conversion to give Metter a 24-0 lead and, that would be the halftime score.

Metter received the ball to start the second half, but the Screven County defense forced the Tigers to punt for just the second time all game.

The Tiger defense responded by forcing a punt themselves to give the ball pack to their offense. Metter took over this time at their own ten yard line.

The offense put together an eight-play, 90-yard drive that chewed the third quarter clock away. The big play on this drive was Reco Coney’s 29-yard run over midfield to get the Tigers into Gamecock territory.

Kaliq Jordan looked to have followed that up with a 33-yard touchdown run, but it was called back due to a holding penalty. The touchdown would eventually come on a 17-yard run by quarterback Taj Hobbs.

Hobbs faked the handoff up the middle and kept himself around the right tackle. He weaved his way through the defense and slipped in between two Screven County defenders to cross the goal line. The two-point conversion failed, but with 1:39 to go in the third quarter, Metter’s lead stood at 30-0.

The game clock was set to continuously run in the fourth quarter due to the Tigers’ lead, so it went by quickly.

The Tigers only got the ball one time in the final quarter, but they made it count. It would only take four plays to score, but all four plays went for over 15 yards.

Jerrail Lawrence started the drive with a 19-yard run to quickly move over midfield and to the 45. Reco Coney carried the ball on the second play and picked up 15 yards down to the 30.

Jerrail Lawrence got another carry and he took this one 17 yards and into the red zone. Aaron Collins finished things off with an 18-yard touchdown run. Collins took the handoff up the middle, shook off a tackler at the 15 and ran into the end zone for the game’s final points. Cameron Robinson kicked the extra point through the uprights to make it 37-0, and that would be the final score.

We caught up with Coach Rodney Garvin after the game to get his thoughts.

“First off, I would like to thank the band and the cheerleaders who support us so well every week. Our fans are turning out to support us in great numbers, and we love seeing the stands packed.

“It’s great to go on the road and beat a top quality program like Screven County. They have a great tradition over there.

“I told our kids in the locker room after pre-game I had no doubt we were ready to play and it showed.

“All three phases of the game were solid. The offense really moved the ball well all night and we got the ball in numerous kids’ hands by run and pass.

“Our offensive line is really beginning to take pride in taking over a game in the second half and it’s showing.

“Defensively, 18 different kids made tackles for us during the game. We played another solid game of bend a little, but don’t break. Shutting out the third opponent in a row is huge and a compliment to the coaching staff and kids.

“Cameron Robinson did a tremendous job with kickoffs keeping Screven County pinned back, and our coverage team did great. Devin Smith, Matthew Chicola and Ethan Oglesby did a great job covering kicks. Devin Smith was solid with the few punts we had to make.”

The Tigers will be off this Friday and then will be back on the road to take on McIntosh County Academy on Oct. 30 in Darien.