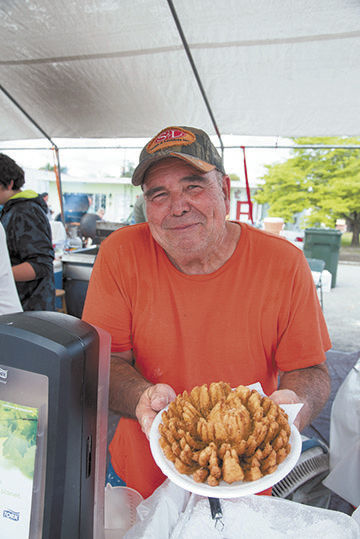 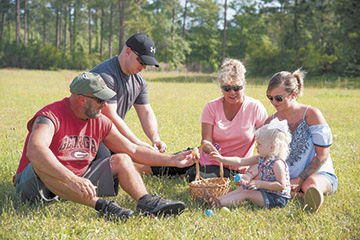 The Johnson Family at the Bloomin' Egg Hunt. 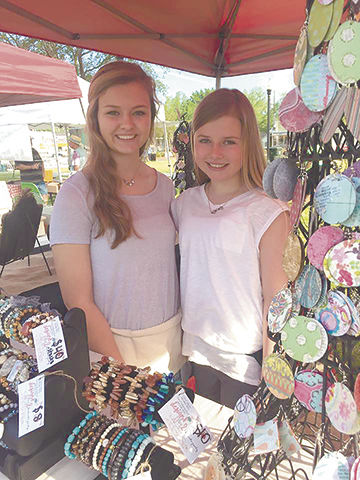 The Johnson Family at the Bloomin' Egg Hunt.

Metter’s population more than tripled on Saturday as an estimated 16,000 people attended this year’s Another Bloomin’ Festival.

In that mix were veteran festival-workers and performers as well as first-time booth vendors and families who have discovered just how Easter weekend is celebrated in Candler County!

In the West Park Food Court, Cassie’s has been a festival favorite food booth since the very earliest days of the festival, over two decades ago.

As a veteran food vendor, Cassie’s owner Timothy Hartsfield has seen quite a few changes over the years.

“We truly love all the town staff and visitors,” he said. “Everyone is outstanding. We truly thank everyone involved for all their hard work and we look forward to next year!

“This year, like all the others, was outstanding,” he said. And he had nothing but compliments for the newly renovated downtown park. “The park was beautiful!”

Hartsfield had nothing but praise for the festival committee and the community.

While Hartsfield and his team enjoyed the new look to the park area, they also wanted to add a new tradition for the festival -- strawberry funnel cakes!

Hartsfield said he likes to offer something new each year, and this year’s new confection was a sure hit among festival-goers.

What’s Another Bloomin’ Festival without bloomin’ good entertainment. And soloist Ben Powell has been part of the entertainment schedule since 2001!

Over the years, Ben said not much has changed with the festival as far as appearance and atmosphere, but he has noticed that the types of vendors have changed.

He also noted this year’s biggest change -- the downtown park itself!

“It looks really good,” he said. “I personally miss the shade that the big trees provided, but in terms of atmosphere and look, I think the park looks great!”

As an alum of Metter High School, Ben continues to look forward to performing at the festival each year. In recent years, fans have noted a change -- not only does he sing, he has added acoustic guitar to the mix!

Chloe Calhoun and Grace Catherine Hood, both 13, have grown up enjoying visits to Another Bloomin’ Festival.

But this year, the entrepreneurial duo were on the opposite side of the vendor table, selling hand-crafted jewelry that they design themselves.

The lifelong friends, both students at David Emanuel Academy, have been working with jewelry for years -- Chloe on her own and Grace Catherine with her mother.

It wasn’t until Saturday that the two officially debuted their own business.

“They had a lot of great support from the community and they will be back again next year,” reported Chloe’s mother, Michelle Calhoun. But you don’t have to wait until festival time to see their latest creations! They will be busily making and selling jewelry throughout the year!

Chloe is the daughter of Michelle and Terry Calhoun of Metter, and Grace Catherine’s parents are Allison and Clay Hood of Canoochee.

New to Metter, Terry and Jackie Johnson attended the festival for the first time on Saturday, and they said it did not disappoint.

“The festival actually, for a small town like Metter, was wonderful. We liked the entertainment and all the vendors that were there and all the little play areas that they had,” said Jackie.

The Johnsons moved to Metter in September of last year from Pidgeon Forge, TN, and they first heard about the festival through Facebook. But what really got their attention was hearing people talk about it around town.

Terry and Jackie attended the festival with their son, Kyle, his wife, Megan, and their granddaughter, Shelby.